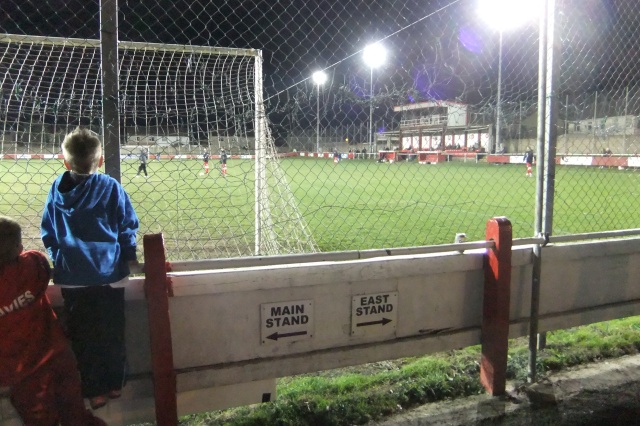 When people think of the great and bitter derbies of the British Isles, Afan Lido v Port Talbot probably doesn’t spring readily to the minds of most. Sure, it doesn’t attract large partizan crowds or have a long history, but with their grounds only 350 yards apart they are certainly closer than almost all others. And judging by the game I saw it certainly has enough needle between the two teams, even for their seventh meeting of the season, to make you almost glad crowds aren’t bigger.

Certainly the Afan Lido goalkeeper wouldn’t be welcoming the Port Talbot fans back. In a previous fixture, one of them was alledged to have urinated in his water bottle, before returning it to the unsuspecting keeper. Despite the dubious claims some odd people have for the healthy benefits of sampling that particular aqua vitae, that action had prompted Afan Lido to ban spectators from behind one goal.

It was behind the other goal that once stood the old Afan Lido swimming pool and leisure centre, from which the football club was an offshoot. It burned down after a fire in 2009, and has since been demolished. The hoardings round the demolition site necessitate a long walk round to the turnstiles should anyone be foolish enough to park in the car park next to the main stand, thinking you’d be able to get in from there. As if anyone would be daft enough to do that.

If that little detour wasn’t welcome,  a detour to the tea bar certainly was. Here it seemed to be about 1982, where cheeseburgers can be had for £1.30 and hot dogs at just 80p. OK, it perhaps wasn’t the best cheeseburger I’ve ever had, tasting about as meaty as a Ryvita cracker, and oddly watery, as if it was boiled rather than fried, but you can’t complain too much at those prices.

The tea bar was one of a collection of untidy buildings behind one goal, housing also the club bar, the changing rooms and a strange tall and narrow two-storey building which looked like some kind of hospitality suite. In the centre of this end was an open paved area for people to mill about, and sit at pub-style trestle tables if they wish. Between this patio and the goal was a high mesh fence, whose multiple untidy repairs gave an impression that Welsh League strikers possess very hard (but woefully inaccurate) shots.

To the left was the new main stand. This was a smart, if not exactly wonderfully ornate structure straddling the halfway line, with eight rows of red seats in three blocks. This was the viewing point of choice for the Port Talbot “ultras”, who sang away for most of the game.

More popular for home fans was the stand opposite, perhaps one of the most unusual stands I’ve seen at any ground ever. Presumably once a standing enclosure, this had maybe 120 seats on three shallow rows, the lowest of which struggled to see over the dug-outs directly in front. The sides of this short stand were splayed out at 45 degrees, with frosted glass panels, two each side, built into the same grey brick of the type that doesn’t exactly exude charm around the town. High above, seemingly too high, is a corrugated iron roof, on top of which sits the newer structure of a tv gantry. If the dug-outs weren’t enough of a visual impediment, this gantry required the addition of three hefty steel supporting pillars in front of the stand. “AFAN LIDO” is picked out in letters on the back of the wall, on squares looking like letters from an old half-time scoreboard.

The far end, where the infamous water bottle incident took place, is merely a footpath behind the goal. A slight slope leads to the back gardens of more grey houses. One unusual feature here was a severe slope at one corner, where the edge of the pitch perimeter rose like a carpet trapped by an ill-fitting door, making the corner flag not only lean inwards at a drunken angle, but also be several inches higher than pitch that surrounded it. 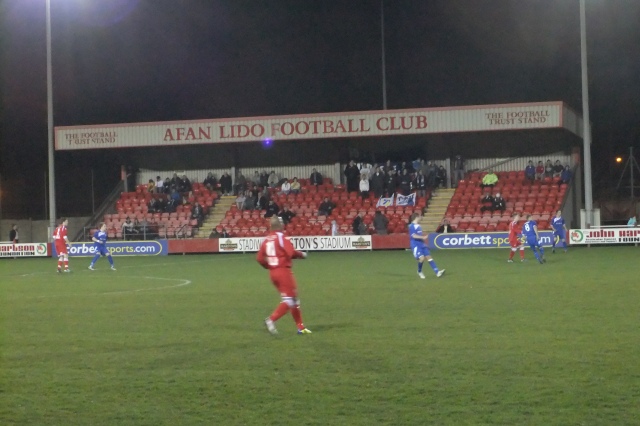 Whatever home advantage a distance of 350 yards – not to mention the three square metres of serious slope – gives, it was the away side who came out more determined at first. It took them just ten minutes to take the lead, heading in powerfully from a corner at the “water bottle” end. Cue more singing from the boys in blue and white in the main stand.

The game started to turn feisty just after half an hour. Accusations of an Afan Lido elbow being thrown threatened to escalate into 20 man brawl. When an uneasy truce was restored, the reds did indeed see red, as one player was booked and another sent off as a result of the incident. They were the third and fourth cards of the half, which would see another just a few minutes later, on a night which would see no fewer than seven dished out in all.

The second half saw Port Talbot more content to sit on their lead with the man advantage. Afan Lido weren’t really threatening, and Port Talbot looked useful on the break. They had a few very decent chances to put the game to bed before they eventually did go 2-0 up, with just fifteen minutes left. A Port Talbot attacker had been upended by an “enthusiastic” attempt at a tackle, and the curling free kick that resulted deceived the home keeper to creep inside the near post. The team ran to celebrate round the bench, and must have thought it game over.

Instead it was merely the start of a frenetic finish. Four minutes later a corner was scrappily turned in at the second attempt by the home side, and the whole mood of the game changed. The man advantage counted for nothing as Afan Lido threw everything forward in search of the equaliser. One shot had been hit by a player already seeing the morning headlines, being shanked out for a throw, before a defence splitting through ball was chipped through for Afan Lido defender Carl Evans. How a defender finds himself the man furthest forward on a break is unusual itself, but the composed chipped finish would have pleased strikers at many a level higher.

An Ex-Port Talbot player himself, he ran shirtless across to where the main Port Talbot contingent were stood, milking the moment, and earning his side an unlikely draw. It also earned him the seventh card of the game, but I doubt he minded too much. 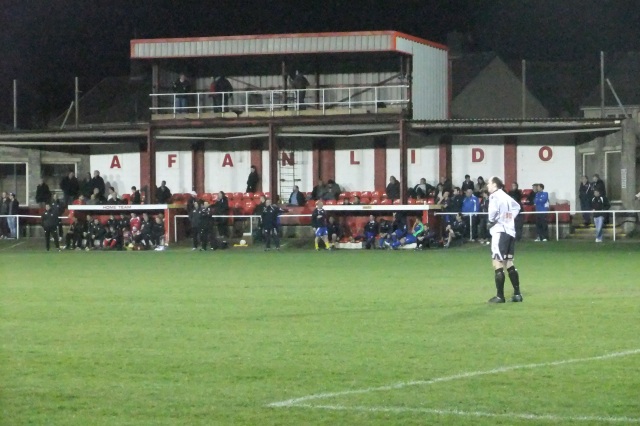 This entry was posted in Wales and tagged League of Wales, LoW, Welsh Premier. Bookmark the permalink.