Ever since I got into football as a kid, there was a curiously appealing “anti-glamour” about Halifax Town. The club seemed to be the absolute distillation of 4th Division obscurity. Even TV highlights of a League Cup tie v Spurs at The Shay in the mid 80s were so dim and gloomy that almost nothing of the ground itself was visible. And to a Southerner, there can’t be many places that sounded more northern than Halifax.

Simon Inglis’ book, Football Grounds of England and Wales, said that The Shay was not only the worst ground in the League, but was so poor that at one stage the manager would try to sign players at the nearby railway station before they’d seen the ground. Things have changed since those days though, for the ground, and the club.

Halifax were a one of the clubs that looked most vulnerable when the trapdoor to the conference opened in 1987. They lasted until 1993. A return to the league few years later didn’t last, and they dropped again nine years later. Six years after that, the club folded, and had to reform at the 8th level, from where they’ve worked their way back to the 5th tier.

If things haven’t been so great on the field, off it, things have definitely changed for the better off it. That “worst ground in the league tag” definitely wouldn’t apply to The Shay now. Once an oval, the place now has three new stands. Both ends have covered terraces for 4000. Individually these would be among the biggest terraces left in English football, and together must give Halifax more standing room than any other football ground in the country. 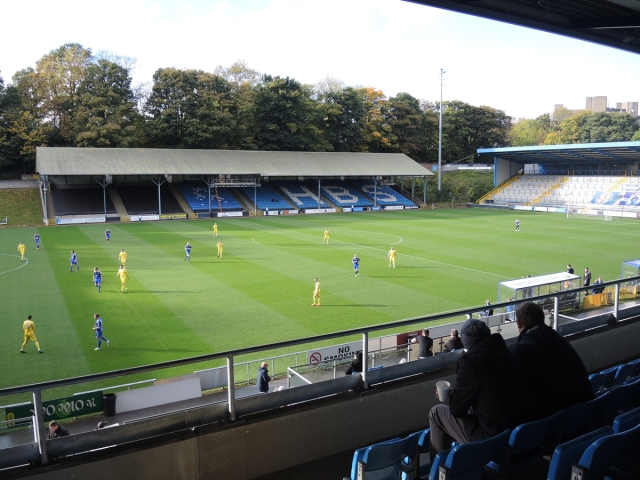 Down one side is a new main stand. Something of a symbol of the club’s decline, it took six years to build, and a hospitality block in the corner is still unfinished. Seating about 4000, it would have a Halifax fan who only knew the tiny rabble of stands there before, rubbing his eyes in disbelief. If it all feels a little corporate, especially with a probably underused hospitality suite stuck in the middle of the stand, a more homely touch is provided by a tea bar selling sweets, buns and cream cakes, along with more usual football favourites. I’d recommend the hot roast beef with gravy in a bap – just make sure you take a napkin!

The only surviving stand is on the far side, with covered seats under a propped roof, with several view-ruining columns at the front. Like one of the two ends, it’s only open when large crowds are expected, which sadly isn’t very often. It doesn’t run the full length of the pitch. To one side you have the overgrown curve of the old terracing in the corner. On the other there’s an odd two storey building, looking a bit like an old building you’d expect to see at the side of a German railway line. Three cups (trophies not tea) were visible at one window, but I’m none the wiser as to what the building is for.

Halifax aren’t having a great season. They are second from bottom and have let in seven on two separate occasions. In fact they’ve not kept a clean sheet all season, and wouldn’t today either, although for quite a while it looked like they might.

After a rain-lashed near five-hour drive up to Halifax, the game surprisingly kicked off in struggling sunshine, and it was Halifax who looked brighter on the pitch too. They took the lead after 14 minutes with a free kick curled over the wall into the far corner, and doubled it just before half time. Guiseley gifted the goal with a poor pass back that was intercepted, before being taken into the box and smashed past the keeper from close range, high into the roof of the net.

Having seen Guiseley go down 0-3 at Forest Green two weeks ago, I was beginning to think I was perhaps their unlucky charm. They must have fancied their chances pre-match, but their confidence looked that of a spotty short kid at a school disco, and hope was being smacked in the face by reality. Their fans, for the second time I’ve seen them, easily won the singing battle against the very quiet home fans, but you just couldn’t see them scoring.

…until that is, when they did.

Halifax had had a chance or two to put the game to bed before a failed clearance fell to a Guiseley player on the edge of the box. Belying all that had gone previously,when the Guiseley forwards were seemingly waiting for a written invitation to have a shot, the ball was just nonchalantly struck into the far side of the net, as if chipping the ball in during the pre-match kick-about.

That changed the game completely. Guiseley grew in confidence, and Halifax fell apart. Five minutes later the ball was booted forwards by the Guiseley keeper from outside his box. It cleared the Halifax back line with ease, and to howls for offside from the home fans, Adam Boyes found himself yards clear, running at the Halifax goal. One deft chip later, he had his, and Guiseley’s, second goal of the game.

From there Guiseley probably ought to have won it, but Halifax just about hung on, probably slightly relieved to have the draw when a rare win had looked on the cards just a few minutes earlier. Not too many grumbles though. I guess supporting Halifax means more than your fair share of disappointment over the years, but maybe if you can buy a sticky bun on the way out, things can’t always seem so bad.

This entry was posted in England, Europe and tagged Halifax, non-league, the shay. Bookmark the permalink.