It may sound weird to say it, but it wasn’t really the lure of watching a cup tie at Old Trafford that tempted me to venture up to Greater Manchester. It was the fact that with a speedy exit from Old Trafford, I could dash down to the tram stop and catch a tram to Altrincham, to Moss Lane, home of Altrincham FC.

And I wasn’t the only one either. Crowded onto the tram, I couldn’t help but notice a German fan nearby putting “Altrincham FC” into German Google on his phone, and checking the route.

There may have been 75,000 fewer fans at Moss Lane, and no half ‘n’ half scarves commemorating this historic Vanarama North clash, but it’s the sort of “proper” old-style game I like going to when I travel away in England these days. No tourists – well, I guess you could count me… and the German guy – and no airs and graces to the surroundings. A good honest club where the red and white on show seemed to be exclusively for “Alty”, rather than that other club a few miles up the road.

Moss Lane is one of those quirky grounds, every side different, that has buckets of character. A decent home end with a low roof is full of dark corners, and is easy to imagine being a fun place in Altrincham’s better years, although understandably a little emptier and quieter during the club’s current troubles. 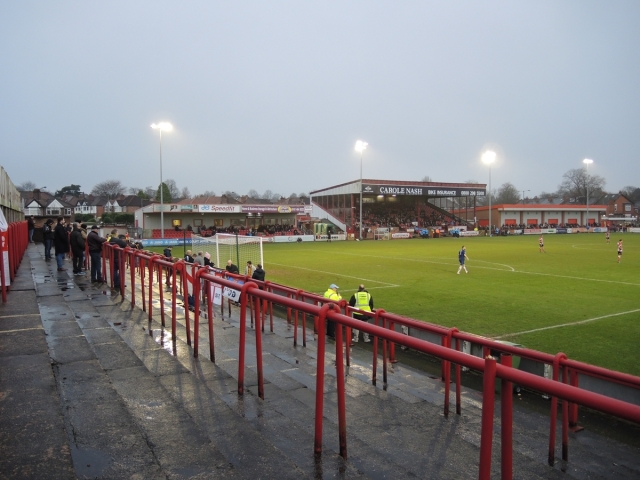 Down the side, mainly covered, you can’t fail to notice the average age of the terrace regular has leaped up by about 20 years. It would definitely be a place to hear a few grumbles and the odd less than polite pithy comment to opposition players. In the middle section of this terrace is a tv gantry, held up by a forest of scaffolding poles, rendering the whole area unusable.

While awkward, that shouldn’t be an issue, with a fair-sized open terrace behind the far goal providing a fine view of the ground. What it doesn’t do though is provide any cover, which is a slight problem on a typically Manchester-like drizzly afternoon, but not enough to deter many hardy folk from using it as a vantage point.

The other side contains the fairly well proportioned main stand, flanked by a small stand on one side and a clubhouse on the other. Shutters cover the clubhouse windows during the game, making it look like a closed retail unit – all thanks to the stupid rule, devoid of any common sense, that says people aren’t allowed to have a beer within sight of the pitch.

Some might unkindly suggest that in the clubhouse with the shutters down would be the best place to watch Altrincham this season, as they are having something of a nightmare. At the end of this, their 23rd games of the season, they’d still only have 8 points. Their one solitary win was away at Stalybridge Celtic three months ago. Their twelve home games have yielded just two points, the last of which was way back on the 6th of September. This would be their 7th consecutive home league defeat. 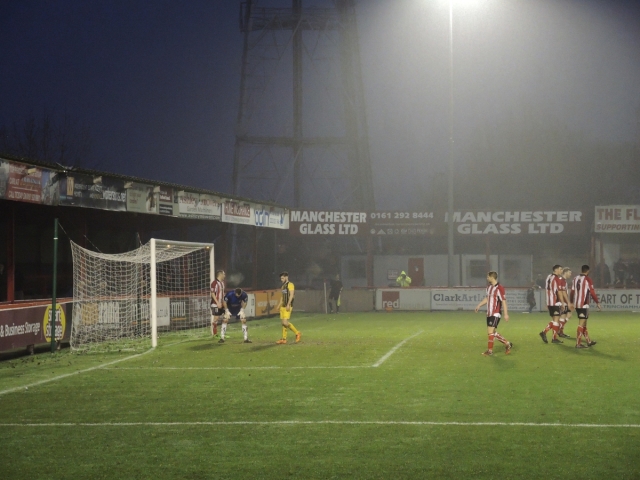 Yet, on Saturday’s showing, they didn’t actually look too bad. They weren’t fantastic, but they certainly didn’t look a team 16 points from safety already. In fact I’d say they had most of the play and for much of the game looked the more likely team to score. Scoring has been something of an issue though, and few of the shots they did have were too convincing.

Whatever problems have befallen the club to cause this slide – they were in the Vanarama National last season after all – the fans seemed to be either loyally supportive or just resigned to their fate. Grumbles yes, but no anger. They certainly could fault the team for effort.

Gloucester had gone ahead after half an hour, the scorer knee-sliding away to celebrate, but had annoyed many with a range of time-wasting antics in the 2nd half. They allowed their hosts extra impetus late on with a player getting a 2nd booking and the subsequent red card, but although Altrincham threw everything they could at the Gloucester goal, they weren’t throwing it with much accuracy. Altrincham’s football was the play of a team desperately wanting to score, but not really having the belief they were going to do so.

It finished, frustratingly, with Altrincham struggling to even get the ball out of their own half for much of the closing stages, before the whistle signalled home defeat number ten. Arrangements were made for meeting in pubs later and/or seeing people back here next week, before trudging off into the dark evening gloom. Moss Lane might not have the glamour of a day at Old Trafford, but is has heart, and that counts for a lot.