After a very long trip to Lancaster the previous weekend, the temptation to have a Saturday “off” was quite strong. However, the forecast for good weather made me fancy a proper day out, and Lincoln, with its historic city centre – and obviously a football ground I’d not yet been to – made it a good choice.

It also had the plus of having a big chunk of the journey along the underused A46, which at times looks like those old photographs of motorways in the 1960s. True, there were road signs warning “gap”, as if I’d have to drive my C3 over small rivers using a ramp, Dukes of Hazzard style, and warnings of “Missing Cats Eyes” had me thinking of those sad forlorn posters taped to lampposts, of missing cats, but apart from a bit of heavy traffic at the end, it was almost a pleasure.

Arriving just before midday, I walked into Lincoln’s attractive centre, and realised the probable cause of the heavy traffic. The place was rammed with tourists, but not just usual tourists. It turnout that for the bank holiday weekend Lincoln was hosting the Europe’s biggest “Steampunk” festival where thousands, literally thousands, would take over the city centre for three days. You’ve never seen so much black lace, purple velvet and spurious metal appendages on clothing. You’ll also seldom see so many pushed-up cleavages, due to the bodices of the Victorian era the fashion takes its inspiration from, although I have to say, I couldn’t help but notice that the women of Lincolnshire didn’t seem to be needing of any help in this department – they must put something in the water in these parts.

It all meant that the time to head down to Sincil Bank came round sooner than I’d hoped, and I made the 15 minute walk from the centre to the ground, following the line of the water channel, Sincil Dyke, from where Sincil Bank takes its name, and also past a young lad doing parkour style backflips on a patch of grass. A passing Carlisle fan was hugely impressed by this, which was just as well, as he wouldn’t be seeing too much else to be impressed by later on.

One other impressive thing is the size of the crowds Lincoln have got since getting back into the league. OK, this was only their second home game, but both so far have pulled over 8000, which would be their highest average for over 40 years if they maintain it. PA announcements outside said the ground, in home areas, was nearing a sell-out. I guess I could have gone in the Carlisle end, but I was glad I’d bought a ticket online the night before. In fact most people queuing outside the mural-decorated walls of the stadium, were carrying an A4 home-printed e-ticket rather than the traditional ticket stub. Personally I’d stepped into the 21st century, and used a ticket stored on my phone for the first time. I’m not a Luddite. I just used to be on a pay-as-you-go deal, and objected to having to pay a £1 internet daily use fee just to scan a ticket.

Once inside it’s clear that Sincil Bank is one of those grounds that despite having been completely rebuilt since the Hillsborough era, it still maintains four distinct sides. Rather than any coherent overall plan for the ground, each stand is different, for better or worse.

First built was the main stand, an unusually tall and blocky structure that only fills about a third of the side. The front of the roof is strangely tall, as if they planned to carry a large advert or vast scoreboard at the front, but in reality does nothing beyond add weight to a roof that somehow requires four supporting pillars.

The ends came next. The northern end, named the Stacey West stand after two Lincoln fans who died at the Bradford fire in 1985, looks like its been stolen from Scunthorpe or Walsall. The once red seats have been bleached so thoroughly by the sun that they now look completely white, with just the vaguest hint of a bit of pink. 616 Carlisle fans would sit in there on this day, spending the afternoon trying to avoid burning out their retinas, looking into that same seat-bleaching sun for the entire game. 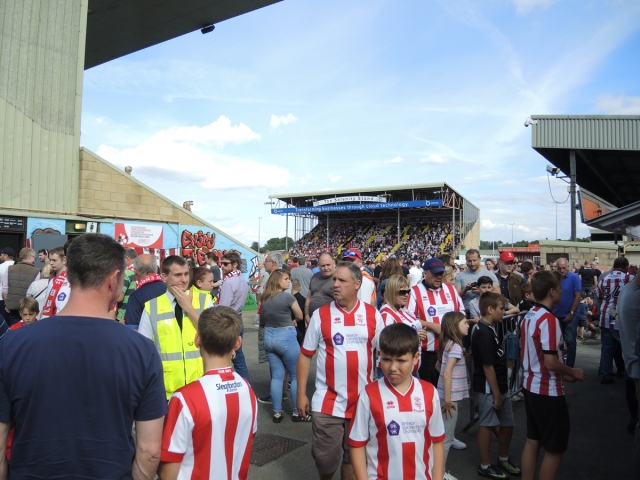 The other end is smaller, with just five rows in inexplicably green seats, with executive boxes behind. The roof over these five rows also somehow needs supporting pillars in the middle. Given that I’d bought my ticket for this end, I was pleased to find none of them blocked the view of the goal in any way. I’d picked this end because it looked the least interesting side of the ground, and also because it would offer a view of the cathedral poking over the far roof. That, and the online ticket page wasn’t offering any other stands.

The newest, and largest stand, is down the Sincil Dyke side. This used to be an open terrace, but now holds about 5700 people, giving it a bigger capacity than the rest of the ground put together.

What was nice was entering a ground of a team still bursting with optimism. After six years of non-league football, the fans clearly believe the club is on the up again, and there was a real buzz about the place. Most of the singing came from a group of fans in the end block of the “Co-op Stand” down the side, apparently calling themselves “617 Squadron” in honour of the RAF unit station at RAF Scampton, just north of Lincoln. That explains the playing of “The Dambusters” theme before the game, if nothing else. They sung away throughout in the continental “ultras” style, which I’m not usually wildly keen on, being a bit one-paced, but they were pretty good at it. They also, now and then, chucked in a few “we are red, we are white, we are fookin’ dynamite” era songs, to maybe please the old ‘uns.

Lincoln started the game without a win so far, but were still knocking the ball around nicely without threatening too much. Carlisle were getting a few corners, but also weren’t really testing the keeper either. It wasn’t dull by any means, but the opening goal, after half an hour, was possibly also the game’s first shot on target. Picking the ball up outside the area, Alex Woodyard decided to just have a crack from the edge of the box, and it flew in beyond the keeper’s dive. It would have made a perfect picture for me too, had some guy not decided to jump at in front of me at the crucial moment.

Halftime came with the score still at 1-0. On a warm day, refreshment was sought. After a quick trip to the gents toilet, which smelt strangely of seaweed, it was a case of joining the long queues for the tea bar. They may well have several serving staff, each in charge of either getting drinks, or pies, or other foodstuff, but they still only had two people taking orders, so it took ages. The guy in front of me turned to moan about how slow it was, and also enquire whether you could smoke outside at half time. He was the second person that day (after the Carlisle fan I saw walking from the station) who assumed I was a Lincoln local. I don’t know why – it’s not as if I have D-Cup breasts.

In the 2nd half Carlisle just wilted. Lincoln had gone close to going 2-0 up, hitting the post, before Woodyard against burst forward and tapped his shot past the keeper, and also just too firmly for a Carlisle defender trying to clear on the line. Five minutes later it was all over. A clumsy attempted tackle in the box by a player already on a yellow saw Carlisle reduced to 10 men, and a casually taken penalty putting them 0-3 down.

They never looked like coming back into it, although they did grab a consolation, somehow turning in a ball from a very tight angle when it looked like it was going out for a goal kick. From there the game seemed to be petering out a little. A low battery warning on my camera with three minutes left had me turning the camera off, to be got out again just for freekicks/corners etc. Naturally enough, within about 30 seconds, Lincoln, from open play obviously, scored the best goal of the game. From twenty yards the ball was curled across the keeper into the far top corner to give the score an emphatic, and well-deserved, look.

As well as being a new ground, this was also a game between the two established “traditional” league clubs I’ve seen least. I’ve not seen a game involving newcomers Accrington, Fleetwood or Morecambe, but I’d only seen Lincoln once, and I’d never seen Carlisle play at all. I’d suggest more cynical Carlisle supporters would argue, given their display today, I still haven’t.