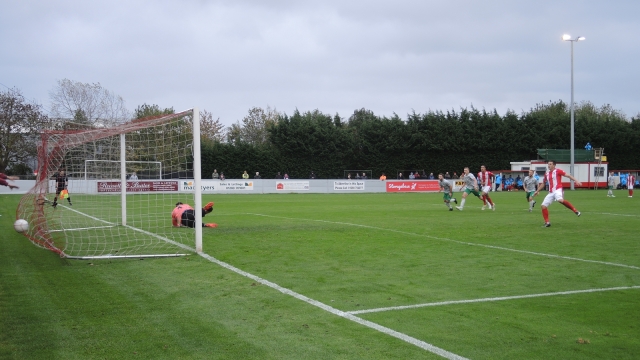 Going to non-league football, there’s a moment where you know the weather has turned, going from pleasant to not pleasant as the winter nears. Each fan probably has their own yardstick, but my personal litmus test is when the cheese on a portion of cheesy chips refuses to melt. And that was the case on this day, even when the chips below glowed like embers through their heat, it still remained a portion chips with a side order of grated cheese.

This was partly due to impact of “Storm Brian” sweeping in on promises of gales and havoc nationwide, even if it did sound like a supply teacher from the 1970s. I await the inevitable storms “Clive” and “Derek”, which surely must come next in the sequence, just to see if it’ll give weathermen the horn, or make them talk about the worst job they ever had.

The wind may have been whipping in at a rate of knots, but at least it wasn’t raining, as seats apart, Brackley’s ground wouldn’t have offered a lot of cover. There’s a functional seated stand down one side, and a terrace behind one goal converted to seats, but the only other cover was behind the north goal. With the wind whipping in from the south, the roof might as well have been knitted for all the protection it would have offered.

I took a position at the start of the match behind the south goal, where a decent amount of terracing flanks the seated stand behind the goal. An enclosed artificial training pitch sits between there and the home of the Mercedes-Petronas F1 team, 250m away. The wind whistled through the close-mesh fence around the training pitch, making it sound like the ground was located on the north ridge of Mount Everest. 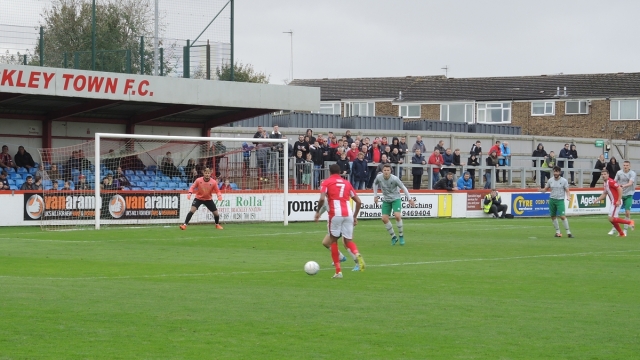 To my right, a couple of ball-boys greeted the emergence of the Blyth team with a round of “you’re f***ing shit…” which kind of made me hope that the creaking gate behind them would smack them on the arse as it blew in the wind, if they had to retrieve a ball through there.

With the wind blowing from that direction, it wasn’t likely. Anything hit into the air was moving backwards by the time it landed, and despite a decent start by the home side, kicking into the wind, it was Blyth who got the upper hand in the first half. A low shot from the right was hit across the keeper, and possibly with a touch of wind assist, it bounced off the inside of the post to give the away side the lead after 15 minutes. It was the 38th league goal Blyth had scored in just over 13 games, and if they could carry on in the same vein, they could almost make the game safe by half time.

The nearest they came though was from a shot from distance, which caught the wind and didn’t slow until it hit something very solid – sadly not a goal net. If anything the wind speed increased during this spell, and was maybe now so strong that it ceased to be an advantage. It became very hard to hit a ball forward that didn’t just run straight through to the keeper or out for a goal kick. Another effort hit the side netting, managing to fool a few of the Blyth fans into thinking it was in.

It wasn’t that cold in reality, but the wind chill was enough to make me glad of the chance to get in the club bar to warm a bit, and see the scores. I don’t like to knock the facilities of non-league clubs, so the smallness of the bar, I’ll let pass. I can even take them not having Guinness, even when their own brand Guinness substitute stout is a substitute is the same way that Simon Church is sometimes a substitute for Gareth Bale in the Wales team. When they have two screen showing the football scores though, and one is a barely legible non-HD channel on an HD TV, and the other is so out of focus that you feel like Mr Magoo looking at it, it’s a mark away I’m afraid.

One reason I was tempted to this game, aside from a small liking of Blyth after going up to see them play last season, was that they did offer the promise of goals. After a six game Italian trip that yielded just 8 goals in 6 games, seeing a team that averaged 4.4 goals a game did appeal. I’d not even seen a team score two goals in a game (except v Reading) since August, yet just six minutes into the 2nd half I had, and it wasn’t by Blyth either.

In the first minute of the half, another probably wind assisted shot from the edge of the box sailed past the Blyth keeper to level the scores. Just a couple of minutes later, a very similar effort went just past the post. And in the 51st minute, with the ball unable to be cleared, it was poked into the far corner of the net, to turn the game on its head.

One home fan even took his t-shirt off and danced about to celebrate. Given that this meant that he was now just only wearing what looked like beach shorts and flip-flops, you have to question his sanity.

The game was now completely changed, with the home side threatening to run riot, and the home fans sang away. That’s not necessarily a good thing. Credit to them for the effort, but they did like the “…and that’s the way we like it, like it, like it, oooh-oh-ooh-oh!” song, and while I wouldn’t call for the death penalty for those who sing it, I would necessarily oppose anyone who made the suggestion.

There then followed a good 35 minutes of both teams giving their all, battling the elements as well as the opposition, and both teams probably deserved more goals. Into the final minutes, and a decisive goal did come. A through ball led to a collision between keeper and attacker, and a penalty was awarded. It was blasted into the bottom corner, and that really was that, and Brackley had their first league win since August. Blyth, with a 5-6 coach trip home to contemplate things, and a league derby v Darlington coming up  next week, will be hoping for better fortunes, and probably better weather too.

This entry was posted in England, Europe, World. Bookmark the permalink.