Sometimes you have to feel a little bit sorry for some clubs. After a cheery greeting at the turnstile and programme stall, you walk into the modern clubhouse with welcoming barstaff and Guinness at just £3.50 a pint, and bacon baps available from another cheerful young woman in the tea bar, and think “this club deserves to do OK”. Unfortunately, despite there being excellent mince pies for sale (50p for two) in the bar, and several Christmas jumpers on display too, few Dunstable fans are going to be feeling full of festive cheer going into the holiday period.

Dunstable went into the game on the back of 10 consecutive defeats, with only one win all season, bottom of the table, having conceded 68 goals in their opening 23 games. Things weren’t exactly going to get any better this afternoon either.

Not that visitors Basingstoke, were obvious candidates for dishing out a trashing. Their away record so far, with one win, one draw, and eight defeats, was only better than Dunstable’s home record by virtue of one fewer defeat.

Basingstoke, and their knot of travelling fans, would have arrived at a ground cold enough to still have snow at the edges of the car park, and on top of sheltered hills nearby. The fans mainly took up position on a tiny covered terrace behind the north goal, not even as wide as the goal itself.

Only a handful of home fans went to the terrace behind the opposite goal, perhaps knowing that with Dunstable’s form this season, it wasn’t the place with the best view of the action. They’d only scored six goals at home all season. Both terraces were of the cheap, dull, but functional variety, as was the seated stand down the side. I can understand why such modular stands are popular, but I’ve never understood why they always have to be so shallow, barely offering a better view than just standing up.

Dunstable actually started the game with a but of promise, with the small group of fans behind the goal seeming to be encouraged by what they saw, as the home side had a few attacks at the Basingstoke goal.

It didn’t last long. In the 8th minute Basingstoke got a penalty, although I’ve no idea what for as it was at the far end. The home fans around me were equally puzzled, not even sure it was a penalty at first.

It was tucked in to give Basingstoke the lead, and cued angry protests from the fans nearby. Unfortunately most of the anger came from a man who seemed to be stuck with a child’s voice, meaning his shouts, even laden with several colourful expletives, were about as threatening as an charging hedgehog. Also, given that they all missed the incident, calling the referee “blind” for giving it, hints at the less than rational approach fans can have to controversial decisions at times.

It was clear that goal changed the game. Dunstable still battled away, as they would all game, but teams facing an 11th consecutive defeat don’t possess the highest confidence levels, and it showed. It quickly became clear that goals were now most likely at the other end, so I made my way in that direction.

The 2nd came on the 21st minute. In what would be a common theme in the game, a high back line was breached, and Sam Argent, who’d also scored the penalty, knocked it past the advancing keeper to double the lead.

Basingstoke eased up after that, although one 25 yard effort out of the blue did come back off the crossbar, before hitting the keeper on the back and rolling just the wrong side of the upright, to be a corner rather than the goal the shot deserved.

Walking round to the clubhouse side, ready to defrost, the shouts from the two benches were more clear. The Basingstoke bench were complaining about their team sitting on the lead, while the Dunstable bench were irate about nearly everything. Their manager, Terry McCool, had definitely lost his McCool, and had to be taken aside by the referee and warned that any more abuse would see him sent off.

The second half continued is a similar fashion, with Dunstable actually having a fair bit of the ball, but seldom managing more than a high and wildly wide effort at goal. Basingstoke just poked the ball forward past the absurdly high Dunstable back line, which played like a set of traffic cones, without the mobility or tactical presence.

The third came in the 53rd minute. Another break, this one saw Basingstoke get behind the defence out wide. Cutting in from the byline, it’s hard to know if the resulting effort was a shot or an attempted square ball across the six yard box. Either way, the keeper’s attempted save did no more the deflect the ball over the line for 3-0. Dunstable’s defenders were now very clearly wearing a “Oh FFS” expression, as the futility of their efforts hit home.

The fourth came 10 minutes later. A real spell of pressure, with several efforts at goal, including one off the line, came to a close with a shot from just inside a crowded area finding the bottom corner. 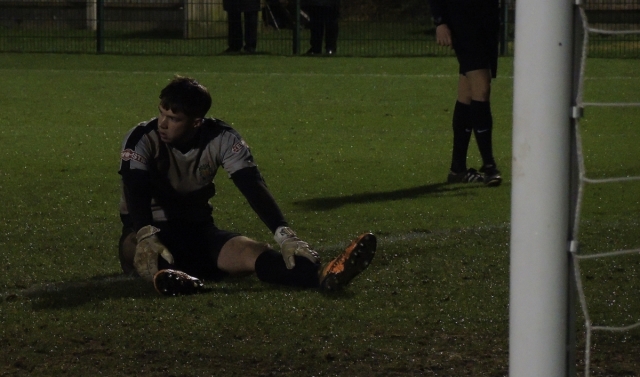 For the next 20 minutes or so, Basingstoke would cut through Dunstable’s barley sugar strength defence at will, but somehow the ball would stay out each time, sometimes only just.

Basingstoke’s youthful contingent, certain of victory, happily sang away, in that way that makes you admire their enthusiasm, but worry about the state of modern schooling. A song about going on the pitch if Argent got his hat-trick was curtailed by someone pointing out that he’d got the fourth, so he’d already got three. The song “We only score when we want to” made you wonder at what stage of the game would any team not want to score.

Still, they choose to support their local club home and way, rather than support Chelsea or Man Utd on the TV, so you can’t knock them. Well, not too much anyway.

The fifth came five minutes from time. Another ball through and Argent was there again to clip the ball past the keeper to make it 5-0. The keeper collapsed into the turf, before sitting up with a “why me?” expression, as if he was trying to think of anywhere he’d like to be than in goal for Dunstable at this particular time.

The sixth was right at the death. Again, another ball through, and again it was Argent rolling the ball in to seal the game. It was literally the last kick of the game, with the ref just blowing for time without even bothering with a restart.

The PA guy announced that after the game there’d be pre-Christmas drinks in the bar, with the players. Just as well, because after that afternoon, I think the Dunstable fans and players would certainly need one.