Only 15 miles separate Aveley from Billericay’s ground that had been our noon kick-off venue, but the prospect of Boxing Day sales traffic at the nearby Thurrock Lakeside shopping mall meant a trip via the Essex back roads to get from one to the other. I’ve no idea if the M25 was as jammed up as feared, but our route to Aveley was only held up for about five minutes of being stuck behind an old guy in a people carrier, who regarded nudging beyond 33 mph as the height of wild recklessness.

Arriving in time for a brisk beer in the new club bar, poshly done out in modern conference centre bar style – no pendants from friendlies in 1972 or obscure cups here – we had just enough time for a quick read of the programme, and a few thoughts about the match, before venturing into the cold.

I say the bar is new. I fact the whole ground is new, only opening this season, with Aveley having moved from their old ground a quarter of a mile away. Any hopes of a quick look at the old place were dashed by seeing developers had wasted no time building houses on the site.

While the bar might not be as cosy as some club bars, eyes are definitely turned towards additional income streams, which probably also explains the 3G pitch, and the fact that they share their ground with today’s “visitors”, Grays Athletic. After a rapid rise, crash, and burn at the end of the “noughties”, Grays lost their ground, and this is their fourth “home” ground since then.

The first “derby” between these two, on this ground, attracted 322 fans for a 4-2 win for Grays as the home club. This reverse fixture attracted a mammoth five more supporters, but sadly also included four fewer goals.

The game had got off to a good start, with Grays scoring direct from a free kick after just seven minutes, but it didn’t really live up to the promise. Or maybe it didn’t help that is was a cold afternoon, getting dark, and most of Aveley’s new ground just wasn’t that inspiring. 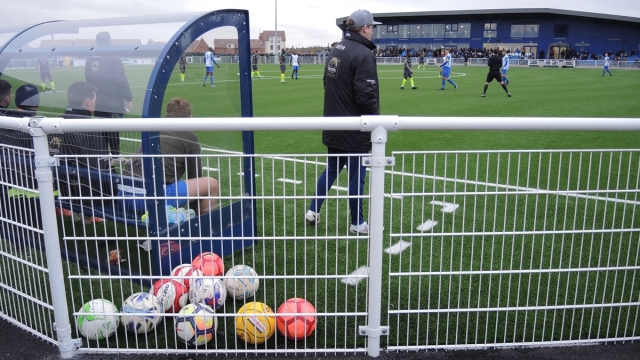 The main stand side I’d liked. The bar I’d liked. The fact that when the teams came out onto the field at Parkside (as the ground is known) they did it to a modified version of Blur’s Parklife (…and they all go beer in hand, beer in hand to their…Parkside!”) I liked. Step away from the clubhouse side though, and you were into anonymous non-league anywheresville. Behind each goal were two small prefabricated terrace units, which even from the back offer a view no better than could be obtained with a set of Cuban heels.

To their credit, the four row seated unit down the side did actually have decent sized steps, possibly a first for such a stand, but it was hardly imposing. Strangely, two further terrace units were visible, back to back, in the field next door, as if they’d assembled them there before realising they couldn’t get them through the gate ready built.

While not a boring game, it did become one of those where it felt safe to dash to the gents during the match, as you didn’t feel it likely you’d miss much. Half time came, and having a burger and getting warm were the priorities.

The 2nd half followed a similar pattern of there being much more effort than skill, with the players looking like they now needed to exchange ration coupons before creating a clear chance. Maybe the coaching at this level doesn’t help. The shout from one bench at a set piece was “Keep doing the same things, but do something different!”, as if ambiguity and being unspecific would balance out into a winning formula.

Eventually a bit of pressure for the home side told. They’d looked 2nd best for most of the game, but with five minutes to go, the ball was somehow bundled in from close range to level the scores. Grays did have a real go at regaining the lead after that, but never threatened seriously, or humorously for that matter.

And so it ended all square, honour even, and even if there were a few grumbles about two points dropped, at least the Grays team wouldn’t have a long journey “home”.