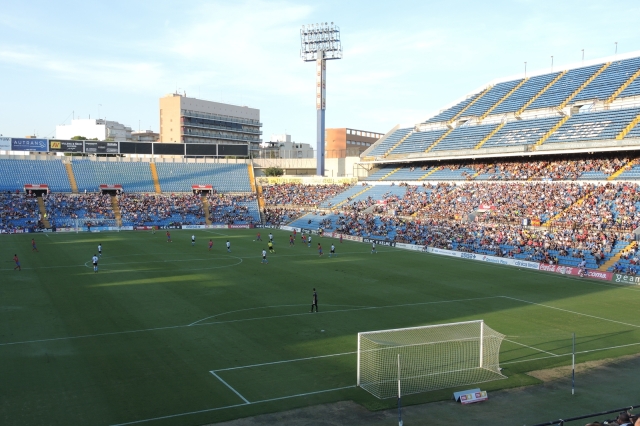 Following on from my staying Valencia, and three nights in Benidorm which I’ll put down as “an experience”, I arrived in Alicante, not entirely sure of how many games I would be going to over my few days in the city. Plans were originally for a day in Murcia, taking in a Real Murcia game, but the internet finally gave up the information that the both Real Murcia and Alicante’s team, Hercules, were playing on the same day.

The site of RENFE, the Spanish train operator, on the other hand, wasn’t playing ball, with the site down for maintenence, and when it came back it indicated that trains times weren’t convenient, so one game only for me this weekend.

That’s wasn’t too bad as Alicante, in stark contrast to Benidorm, is a lovely city, with a castle high up on hill (thankfully, with a lift, unlike Xativa), a beach, an old town district full of restaurants, and several proper pubs that even sold Guinness – a special mention to the Little Duke, a fine place on a corner.

It also possesses a stadium that in 1982 was a World Cup venue, hosting Argentina’s group stage wins over Hungary and El Salvador, as well as the 3rd place play-off game between Poland and France. Handily the stadium is only 2 km from the centre. Less handily, all 2 km of that walk is uphill. There were apparently buses in that general direction, but I really don’t do buses abroad. I never know the bus routes, which bus I should take, where I am on the route, or where to get off, so with them being about as much use as a knitted speedboat as a mode of transport, I began the half hour trudge up the hill. At least it was a nice day for it.

Even with kick-off at 6.30, it can still be a tad warm in this part of the world in early evening, so I sought out a seat in the southern end – not only would I possibly have some kind of shade in this completely open stadium, but at just €10, it was cheap to get in too.

Not wishing to have another Sunday dinner of crisps, I’d eaten out in an Italian restaurant in the old town before going to the game, but as kick-off approached I found myself feeling a bit peckish again and went in search of the club’s equivalent of a tea bar. Had I been a bit more observant, I’d have noticed the sign “Cafe Bar” in the corner to my left, which looked well-stocked enough to have a proper coffee-shop style coffee machine, and perhaps some decent food. 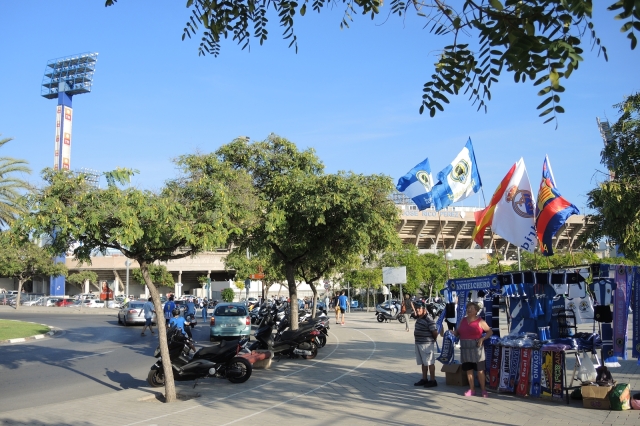 Instead I went to the concourse underneath the seats, and opposite the toilets I found their refreshment kiosk, where the food options appeared again to be crisps. Aat least they were crisps I couldn’t identify, rather than being the local version of Walker’s ready salted. These were more of a corn snack, a bit like nik-naks in shape, but with a picture of a cat on the front. I had no idea what flavour they were, but I didn’t think they were cat flavour, unless cats taste buttery. My guess for the flavour was “something in butter”, but it turned out they actually were just butter flavour. They weren’t horrible, just a bit “different”.

When the José Rico Pérez was being chosen as a world cup venue, Hercules were in the best spell in their history, having been in the top division since 1974 – when the new stadium opened. Their old ground has now been landscaped as a park near the station. Things aren’t quite so cheerful now, with the club in the third division again, and it’s tempting to think Hercules would have been better off back at their old place, especially as they got relegated a few weeks before the World Cup started, and have only had four years back there since, and only season in the last 20 years.

Not that the José Rico Pérez stadium is a bad venue. It does show just how much world cup standards have changed over the years, but it’s easy to imagine it being a quite imposing venue if its 30000 seats were even close to being filled. A single lower tier gently curves round the goals ends, as tends to be the way in Spain, while two additional slabs of seats on either side add extra capacity. Only one was of these was in use, on the main stand side. The large slab opposite was empty today, rising up into the blue sky, looking like you could see all the way to Murcia from the top, if only they were letting you up there.

Hercules went into the game top of the league with four wins out of four. The visitors, Teruel, had made the 200 mile trip down – and remember the Spanish third tier is regionalised into four divisions – in mid table. The attractive town of Teruel’s entire population could have comfortably fitted inside José Rico Pérez’s 38,000 world cup capacity, but only about 20 of them had made the journey on this Sunday, and it would be worth the trip.

An expectant crowd of possibly around 10,000 or so filed in, a large number in the end I’d chosen, expecting another victory. Three of this number would wait until about 20 minutes in before turning up and sitting right in front of me. One of them was an attractive young woman, but the one who sat right in front of me was one of those excitable guys who jumps up at every moment.

As much as I commend the enthusiasm, especially for supporting the local team rather than being turned by the glories of Real Madrid and Barcelona, it is a tad annoying, especially if you are trying to take a picture or two. Moving wasn’t an option as the end was quite busy, and although there were empty seats next to me, they were mainly empty because the local pigeon community had been using them for target practice. 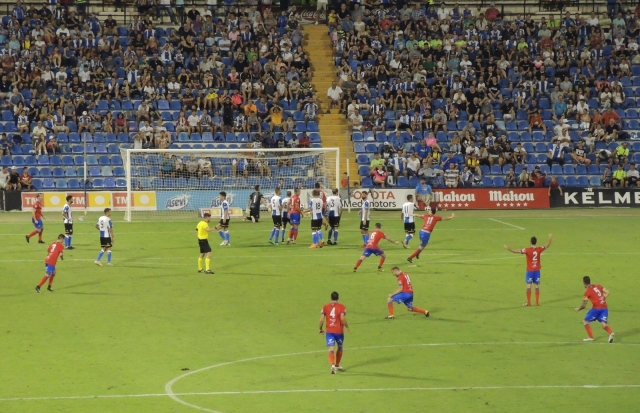 Enthusiasm got a bit of a rude shock early on though. An early attack from the visitors down the left was met by a deft touch from the boot of a Teruel forward, and everyone just seemed to watch in stunned silence as the ball rolled towards the far post across the keeper, before gently bouncing into the goal off the post. It somehow seemed slightly surreal, as if people almost couldn’t believe it had gone in, but the Teruel players, in their Spain-style red & blue kit, were off celebrating in the corner. This corner housed the fans who seemed to be the Hercules “ultras”, and they didn’t do a great deal of singing after that.

Despite the setback, Hercules were still the better side, and it looked a matter of time before the equaliser came, and the fans were still watching the game, shielding their eyes against the lowering sun, expecting the home side to go on to victory. Hercules even had the confidence to dig out the 1970s Coventry City “donkey kick” free kick routine, albeit with this incarnation turned round the post for a corner.

Half time came and went, with Hercules still looking the better team, but it just wasn’t happening for them, and the cries of excitement from the crowd started to take on a hint of anxiety. Could this be one of those days?

With fifteen minutes left their hopes were killed off. A free kick was hit up and over the wall into the net, and the Teruel players ran off into a corner again to celebrate. In the opposite corner at that end, the small band of Teruel fans celebrated, their 200 mile Sunday trip looking worthwhile, and that was pretty much that.

Hercules did still come piling forward, but one disallowed goal apart – whistle gone long before the ball hit the net – it just wasn’t working out. Just too many ambitious shots from distance, and crosses played in with too much haste, meaning there was rarely a moment when Hercules looked about to score, despite the pressure. Perhaps the odd unconvincing shot, but that was about it. It meant a very subdued crowd for the closing stages, some starting to drift off into the night a fair while before the final whistle blew.

When it did blow, some of the Hercules players slumped in disappointment, knowing they’d wasted a good chance to increase their lead at the top of the table. The home fans filed out without comment. Who knows what Andy Capp, painted onto the concourse wall in home colours, would have made of it all. I guess if doesn’t cop too much flak from Flo for putting money on a home win, and he could find a pub in the old town selling a pint of bitter or too, with Hercules still top of the league, life wouldn’t be too bad.