Two tips if you ever go to watch Dorking Wanderers. Firstly, don’t try to get into the car park near the ground unless you get there very early. You’ll just join a snake of cars all looking for an elusive parking spot, and it’ll take about 20 minutes to get out. Secondly, also don’t get there late if there’s a crowd over 1000 expected, as finding a decent spot to view the game from isn’t easy. I overheard a fan saying there were plans to put 5000 seats in upon promotion, which sounded a tad optimistic, but for now it’s mainly hard standing on three sides.

Other than that, it was not a bad day out on what turned out to be a historic day for Dorking, clinching the title and winning promotion to the National South.

It was that prospect that swelled the crowd, as well as the hundreds who travelled up from Worthing. Other than the friendly vibe around the ground, and one or two rather fetching young women behind the club bar, the Worthing fans wouldn’t have returned home with too many happy memories of the day.

Worthing, who have promotion aspirations of their own, started well enough, and the game started in what some might call a chess-like tactical battle, where both teams tried, with a degree of caution, to break down the other’s defence. Others might call such a cagey opening, “a bit dull”, but there was a lot at stake for both sides.

Gradually Dorking started to get the upper hand, clipping a shot from close range over the bar, but the game really needed a goal. There looked a fine chance of one late in the half. Dorking were getting more and more success down the left wing, and cross was put in that looked perfect for the striker in the six yard box to head in. The header though went backwards, away from the goal, mainly because he’d been fouled, which would be hard for the ref to miss. 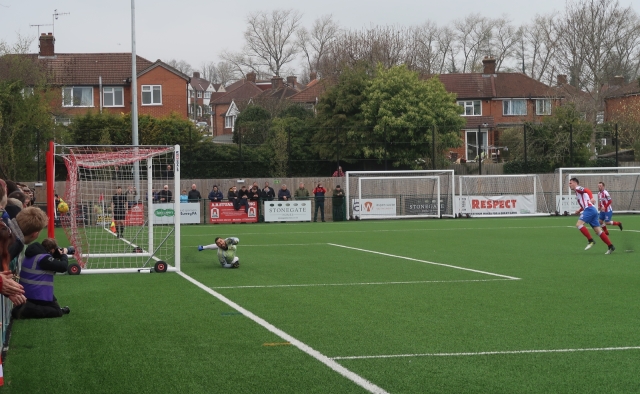 The resulting penalty wasn’t missed either, and Wanderers, who were relying on other results going their way to win the league, were on their way to keeping their part of the bargain.

After a swift pint in the club bar, I watched most of the second half in the half where Worthing fans were mainly located, mainly because I could see the pitch from there. It’s safe to say they weren’t too happy with their day so far, and it only got worse. A deflected shot put Dorking 2-0 up, and everything seemed to be going against them. The referee even managed to block a promising attack by getting in the way of a pass, getting the Worthing fans even more annoyed. I’ll blame youthful exuberance, but it’s not rare for fans of well-supported non-league clubs to have a sense of entitlement, and the comments as I walked past them reflected that. It was just frustration, but the truth was Worthing were just being beaten by a considerably better team on the day.

To rub it in, a few minutes later Wanderers added a third, when a set-piece couldn’t be cleared, and the ball was simply nodded into the gaping goal to wrap up the win.

Wanting a change from the floor-level vantage point, I made my way to the main stand, where I managed to find an empty seat that didn’t have a season-ticket holder’s name on it, sat up at the back. Sitting down, I realised possibly why it was empty. The view of the goal to my left was obscured by the glass screen ends. They were lovely and clean – a rarity at non-league grounds – but made from a kind of glass with enough distorting ripples to make it not exactly ideal. I was also near two radio reporters, both chattering away in that weird radio-reporter intonation that makes it sound like their every thought is being read from a piece of paper that’s just been handed to them.

With the game as good as over, both sides were going through the motions to a degree now. For Wanderers players and fans, thoughts would no doubt be turning to other scores. The hope was that Haringey Borough would drop points at Hornchurch, but they were 2-1 up, meaning the final whistle was a slight anti-climax. Nearly there, but not quite. The guy on the PA starting talking about having to wait until next week. I also thought it oddly fitting, as I feel promotions should be secured on sunny days, not the gloomy light rain of the day.

The crowd started to shuffle out, when there was a cheer from the corner terrace. It spread like a wave around the ground, and to the players, who knew it meant the score at Hornchurch was 2-2, so promotion, and the title, was theirs.

A small and incredibly youthful pitch invasion followed, while the squad celebrated, dancing and singing away. While celebrations at this level, due to the lower crowds, lack the spectacle of thousands celebrating at a league game equivalent, you do get a more personal feel to things. So many of the plays and staff, volunteers mainly, and even the fans, will know each other. The sense of it being a club, in the true sense, rather than a corporation, is so much stronger.

So what if, as the exasperated Worthing fans sang “you’re just a shit Billericay”? If money is spent wisely, and a legacy is created, that has to be a good thing. Fans from Dorking, seeing a club from the town promoted to its highest ever level, won’t be worrying too much. Now, if they could only sort out that car park…