Between the giant Land Rover factory on the edge of Solihull, and Birmingham Airport a mile to the east, lies Damson Park, home of Solihull Moors FC. Opened in 2000, after a decade or so of exile for Solihull Borough, it was also shared since 2005 with another local club Moor Green, after their own ground was burned down in an arson attack. Two years later the clubs joined forces to become Solihull Moors.

Damson Park is certainly a ground of “two halves”, and a bit odd-looking because of it. The ground used to be a driving range, and one end’s surprising ornate brick finishing is due to it once being the covered area from where argyle-sweater clad golfers would mishit balls to their heart’s content. It’s now a mix of terracing and seats, with a “tuck shop” at the back, where people with supreme confidence in the strength of their teeth could purchase chocolate bars no doubt frozen to the hardness of diamonds on this wintry afternoon.

Down one side is perhaps the smallest double-decker stand in the country. Four rows of very badly faded red seats sat in front of the side wall of the clubhouse/bar down this side. Above these, presumably a directors’ box type enclose, has been formed from girders and tacked incongruously onto the side of the building. From the front it’s not so bad, looking almost like something you’d find at a small cricket ground. From the side though, it looks only like someone at the club had friends at the council to ease them through the planning application process. It’s about as attractive an addition as the large tattoos to Cheryl Cole’s buttocks, but at least it has the advantage of looking OK from one angle.

Next to here was a burger van selling thick juicy looking burgers that looked fantastic, if only the queue would die down enough to make buying one an option. My prior purchase, in the bar, of a ham roll, felt disappointing insufficient. 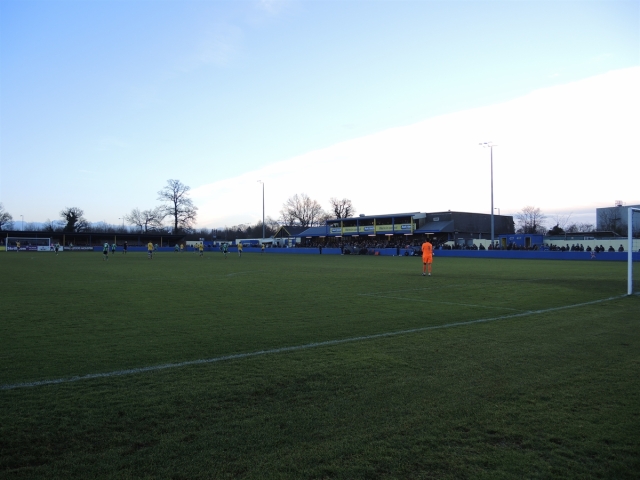 Next to this was an old-fashioned club shop, which like all such old-fashioned shops was an Aladdin’s cave of football programmes, bursting out of their boxes. While the bitter truth is that the number of people actively searching for a random Alvechurch programme from 1991 is rather small, and the 30p or so they’ll spend doesn’t make for a grand business plan, it’ll be sad when they are gone. At least one of our party, spending half an hour looking for and purchasing the programme for the last ever Moor Green home match, did his bit to maintain the tradition.

Both the other sides were disappointingly empty, being no more than a tarmac path. Beyond one, the control tower of Birmingham Airport was visible away in the distance. From that side though, you could watch the low winter sun setting slowing behind the corrugated tin-shed roof of the Land Rover factory – a sight of true beauty to anyone unfortunate enough to have never seen better.

Despite being only a few metres from the ground, the factory is so vast that Birmingham Airport’s control tower, three-quarters of a mile away, is actually nearer than the factory’s far end. That makes sense, as in its days as a British Leyland factory, three-quarters of a mile is about as far as one of the Rover SD1’s made there could go before developing rust or a mechanical problem.

With problems of their own, off the field rather than mechanical, were the visitors Worcester. Having lost their ground they now play in Kidderminster, and this has unsurprisingly had an impact on the field too, with Worcester third from bottom. Solihull, in contrast, were having a fine season, and could even have gone top if they’d won and results elsewhere gone their way.

The gap between the two would hardly be obvious during the game though. The first half could maybe be most politely described as energetic, with plenty of effort on show, but not a huge amount of composure. It started well enough with a few chances for both sides, but it fizzled out and it did at times feel that watching planes coming in to land might provide the afternoon’s best entertainment. The facts of Worcester having a header cleared off the line and two goals disallowed does hint at the stats being a better record than my memory though. In truth, for both disallowed goals the whistle had gone long before the ball hit the net.

The second half was better. Worcester attacked more, but it was Solihull who went in front, slightly against the run of play. The pink-shirted Worcester keeper, who’d earlier performed the most effeminate girly flap of an attempted punch in the first half, should have had a shot covered, but somehow let it past him to put the home side ahead.

Worcester, backed by decent away following, tried to get back into the game, but just lacked a spark to give them a bit of belief. It was given to them with about 15 minutes left, with a Solihull Moors defender sent off for a 2nd booking.

From there it was just backs to the wall for the home side as Worcester piled on the pressure. Solihull Moors looked like they were going to hold out, but were undone with just three minutes left. A ball into a crowded area somehow found its way to a striker just inside from the penalty spot. Turning and finding himself with a clear shot, he hit it first time low into the bottom corner to level the game.

With a little more time you’d have backed them to go one and win it, but they are near the bottom for a reason. One final effort, with a crowded area, that was more threatening to the landing planes than the goal, showed where their problems lie. It meant that the season’s beat 575 crowd all went home a little disappointed, but also glad for the chance to get somewhere warm and defrost.