Traditionally Boxing Day was always football’s “derby day”, when local rivals would play each other for local bragging rights, and crowds would swell way above normal. In the professional game the idea is now dead, on police advice, but in non-league it lives on, making it one of the more rewarding days out, and some of those derbies can attract far more than people would expect.

One such derby, well off the radar for most, is the Eastbourne derby. Not only does it take place in the Southern Combination league, a full five divisions away from the football league, but it doesn’t even feature the main club from the town, with Eastbourne Borough playing three divisions above.

I’d actually fancied going to Town’s ground “The Saffrons” for a while. It’s reasonable for the level, but the backdrop of the grand Victorian town hall and other buildings gave it a touch more character than most would have in this division, and the derby would give it a crowd much higher.

Boosted by two people from nowhere near Eastbourne, 856 people made their way to this match, in a division where crowds are normally measured in two figures. Even allowing for Town being the best supported team in the division, averaging 223 before this game, the crowd was nearly four times their average.

Town even have their own band of “ultras”, banging drums, singing away, and bringing their own bit of atmosphere to the world of county league level football. Some such groups divide opinion among fans, but they seemed an amiable bunch here, just having fun singing away about Eastbourne being wonderful for being full of old people and seagulls, among other things. 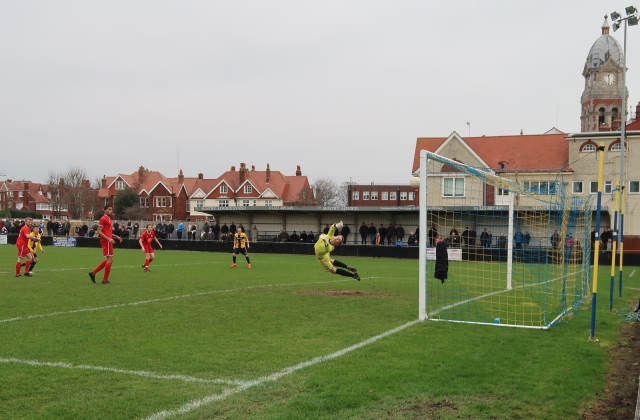 Not so joyful were the Eastbourne United fans, of which a fair few had made ‘gruelling’ two mile trip from their ground “the Oval” (which is no longer an oval) on the other side of the town centre. United’s first win of the season had come just five days earlier, defeating Little Common (who currently also play at the Oval in a groundshare agreement) 2-0, boosting their points tally to a rather modest five points from seventeen games.

Given their troubled season, the detail that they’d they lost all eight away games so far, and that they’d lost the corresponding fixture last season 1-8, confidence probably wasn’t high in the United camp.

On the other hand, maybe that first win was the boost they needed. They certainly didn’t look like hopeless whipping boys when the game started. Maybe it was local pride, but while Town were clearly the better team, United were competitive and still in the game for most of the first half. They even had the odd breakaway chance of their own, and did come close to taking a shock lead once or twice.

However, despite valiant defending, it did have the look of a game where the home side, in their yellow and navy blue, could take the game by the scruff of the neck if they only got that first goal. As it turned out, United scored it for them, with a shot across the box put into the roof of the net by a United defender. As the Town players congratulated each other, he sat in the six yard box with a “why me?” expression.

If that was a poor goal to concede, they couldn’t do much about Town’s second two minutes later. A shot from the edge of the box was struck with power, and even though United’s keeper go a hand to it, possibly two, it wasn’t enough to keep it out. 2-0, and probably already game over.

Within 6 minutes the “probably” could be wiped out. Finding space at will down the right, Town cut into the box, and with a fine bit of individual skill, Town’s Brad Pitchard drew the keeper, stepped round him to the left, then calmly tucked the ball past the defenders on the line for 3-0.

From 0-0 at 28 minutes, it was 3-0 at 36, and it could have been worse. Town were going for the kill. Two further shots from wide flashed across goal, and the United keeper, who had a good game despite the scoreline, turned another shot over the bar.

Another burst of United pride was punctured by a fourth Town goal just 10 minutes into the second half, and five minutes after that – after another Town shot had hit the angle of post and crossbar earlier – it was five. This time another ball was hit across the box, and the determination of one defender caused enough of a contact to see the ball spinning into the net. The Town players looked on with grins, seemingly unable to believe the good fortune, in what was turning out to be a very enjoyable day for them.

With half an hour left, another eight like last year didn’t seem out of the question, but Town picked this moment to ease off, and United chose to up their work rate to avoid another humiliation. Despite this, it was Town who came close to adding another goal, with an attacker taking the ball round the keeper and scoring, before seeing this sixth goal ruled out for offside.

The final whistle ended a very enjoyable lunchtime clash for the hosts (and neutrals) but not one that United fans will remember too fondly. “Why do we always lose on Boxing Day?” asked a small United-supporting child, who can’t have had too many United-related thrills in his short life. There was no answer. His father clearly didn’t have it in him to bang the drum for United at that moment. With local pride definitely with Town, and the ultras singing away, finding someone to bang the drum for them – both literal and metaphorical – wasn’t going to be a problem.